Fixing "This file should not be imported in this context." Layout Error

Recently, while trying to export / import a Divi Builder page, I received an error I hadn't seen before:

This file should not be imported in this context.

A quick google led me to see that this was a problem others have been having. In reply to one such comment, Elegant Themes' advise:

I was trying to export from a page and import to a blank page on another site, so there didn't seem to be any particular problem with the place I was uploading the file to. While I could have tried uploading it to the Divi Library directly, I was pretty sure I should be able to import directly to the page, and it was something I wanted to do, so I figured I'd save the Divi Library upload as a last resort.

Looking at the file I had exported, it was of the right file type (.json), and was not zipped. However, when I opened the file, I realized it was completely empty. Clearly there was a problem with the export which needed to be sorted before the import could be expected to work. I tried reloading the page I wanted to export, and re-exporting it. However, the exported file was again empty.

Changing where you import the layout to

It seems that the json layout files record the "context" in which they were saved. If you open a json layout file in a text editor you should see that it starts with something like : {"context":"et_builder", …

So if you get the "can't import in this context" error, try importing into both the library and in a new draft page and see if one of those works for you.

Another thing that I have found to affect whether or not the export works is the choice of filename for the exported layout. In one case, I noticed that if the filename I entered contained spaces or hyphens, the downloaded file would be empty. Simply changing the filename to a single word (e.g. "layout") resulted in the download working correctly.

I found this on ET's support forum. One user apparently had different results with the different uploaders in Divi. Here is what they found:

Apparently there are 3 ways to add the .json File.

I believe the "Page editor" being referred to in the last item is what is now known as the Classic Builder. To access it, first enable the "Divi > Theme Options > Builder > Advanced > Enable Classic Editor" setting. Also, temporarily disable the "Enable The Latest Divi Builder Experience" option above it if you have that enabled already. Now go to the standard WordPress "Add New Page" or "Edit Page" screens and you should see the classic builder with its up / down arrow icon (the import/export icon), like so: 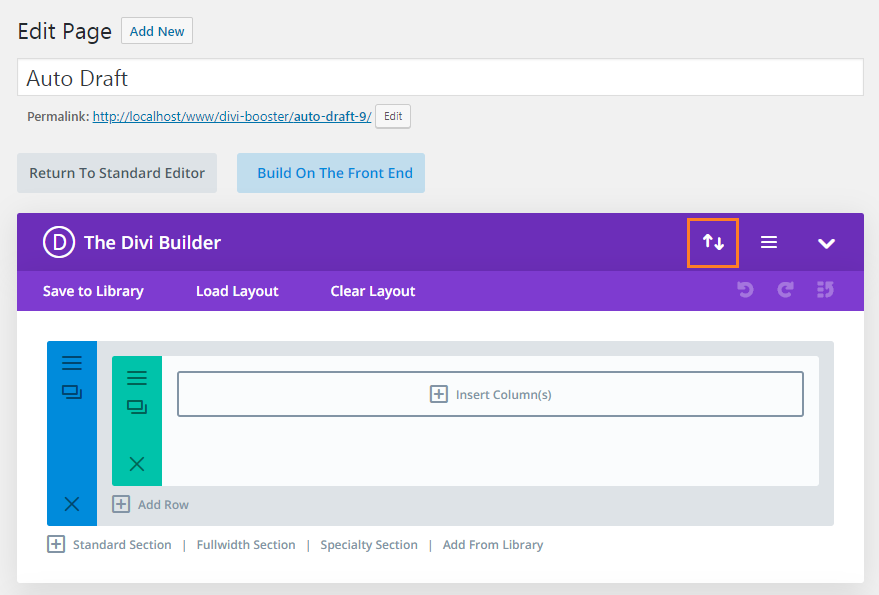 As Joakim points out in the comments, a file permission error might also trigger the context error:

Make sure WordPress has the correct permissions to upload files.
Instead of providing a permissions error, it will give you a context error.

Rudy notes in his comment that removing modules which had large background GIFs fixed his import issue:

I decided to go step by step by importing each of the modules of the layout. I realized that in 2 modules I had 2 GIF files as a background, each weighing 1 MB.
When I deleted those collections in the library, the import worked for me.
I don't know if it will be the type of file or the size of the file.

Want get more out of Divi?